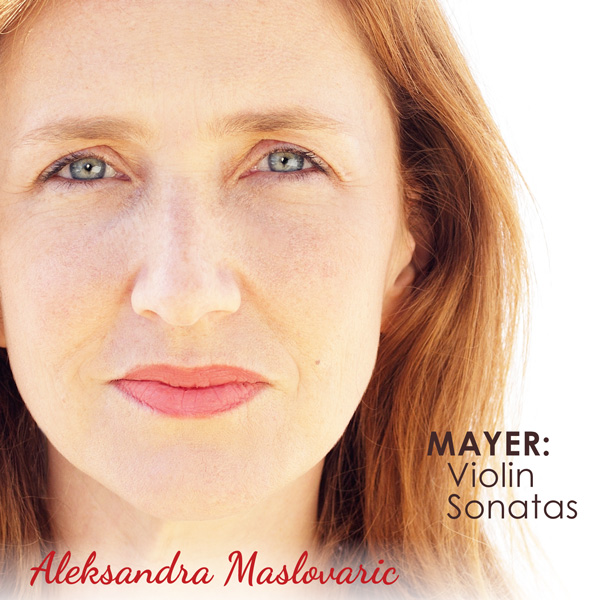 “Violinist Aleksandra Maslovaric is a rugged musical adventurer… poring over each lyrical line with loving care… she has managed to unearth some genuinely neglected works worth hearing.”
—Ken Smith, Gramophone

Sonata in E minor for Violin and Piano, op. 19

Sonata in E flat Major for Violin and Piano

Sonata in A minor for Violin and Piano, op. 18

Since her 200th birthday in 2012, music lovers all over the world are expanding their music collections and rediscovering the compositions of Emilie Mayer. The violin sonatas in this recording were written after she achieved acclaim for her large symphonic works, and show the breadth of Emilie Mayer’s talent and skill. While recalling the romanticism of Beethoven, or of her contemporaries Liszt & Mendelssohn, they are at the same time excellent examples of the power, passion and playfulness of the composer’s own distinctive style.

I am most excited at this opportunity to share Emilie…

In early 2000, I inadvertently came across the works of several little-known female composers. This discovery inspired me to build a new repertoire on this foundation. I am continually and pleasantly surprised at just how vast the options are in beautiful music written by female composers. Although it’s difficult to make such a broad statement, Emilie Mayer is probably my favorite thus far.

Emilie Mayer is credited with having composed 9 sonatas for violin and piano, only one of which is in print today. With persistence and assistance, I was lucky enough to place my hands (and my bow) on 7 of the sonatas—the remaining 2 have been unfortunately lost. Choosing which of these wonderful works to share first, was not an easy task, but the three sonatas I selected for this recording are each a pure joy in every respect. Beyond the beautiful melodies and harmonies, these works have power, and illustrate Emilie’s deep knowledge of and devotion to her art.

Of course, this is what I see, hear and feel in Emilie’s musical legacy.

It is my sincere hope that you come to love these works as much as I do.
—Aleksandra

Hardly any other composer of her time left behind so comprehensive an oeuvre in as many diverse musical forms as Emilie Mayer. With her composition of a multiplicity of symphonies and overtures, she stands out distinctly from other well-known composers. Yet in addition to those larger works, she created a series of piano and vocal compositions and a considerable number of chamber works, such as the violin sonatas presented in this recording.

Emilie Mayer was born on 14 May, 1812 in Friedland (Mecklenburg), the third child and eldest daughter of a well-to-do pharmacist. Even in her first years as a piano student, the young Emilie apparently interpreted the pieces she was given so “freely” that her teacher suggested that if she could do it better, she should compose a piece herself. So, by the age of seven, she began to write short compositions of her own.

We know few details of the next several years of Emilie Mayer’s life. However in 1840, her life took a sudden turn: her father fatally shot himself, 26 years to the day after he buried Emilie’s mother. Shortly thereafter, at almost 30 years of age, Emilie chose to begin a new life, and moved to burgeoning Stettin (now Szczecin, Poland)—a city some 10 times the size of her hometown. There she determined to study composition with Carl Loewe, the esteemed Music Director of this regional capital city. Author Marie Silling, describes that “After a challenging examination, Loewe said in his crafty manner ‘You know nothing, and at the same time you know everything!’ ” Silling further quotes Loewe as saying that “such a God-given talent as hers had not been bestowed upon any other person that he knew.”

Mayer’s musical immersion in Stettin must have been quite profound. In addition to private study, we can assume her attendance at the frequent concerts coordinated by Loewe, featuring the works of Beethoven, Mendelssohn, Schubert and Spohr, and even an 1844 performance by Franz Liszt. And then in 1847, the Stettin Instrumental Society premiered two of Emilie Mayer’s own symphonic works.

The performance of her first two symphonies in Stettin marked another turning point in the life of Emilie Mayer: her studies with Loewe had reached their culmination. So in 1847, probably on Loewe’s advice, she went to Berlin to further her studies of instrumentation with Wilhelm Wieprecht, and her studies of fugue and double counterpoint with Adolph Bernhard Marx, a friend from Loewe’s youth in Halle. Once in Berlin, Emilie Mayer began publishing her compositions, and to much acclaim from the city’s musical elite, performed her works in private concerts. Then in 1850, Herr Wieprecht conducted his orchestra in a memorable concert at the Royal Theatre, presenting exclusively compositions by Emilie Mayer.

Critical and popular success led to repeated concerts of new compositions in the following years, and Emilie Mayer firmly established herself as a professional composer. All told, she produced some eight symphonies for full orchestra and at least fifteen concert overtures, plus a large number of string quintets and quartets, piano quartets and trios, and Lieder. Mayer moved in the highest circles, receiving many honors, and traveling to Cologne, Munich, Vienna, Brussels, Halle (Salle), and again to Stettin to attend performances of her works.

After devoting herself primarily to the composition of works for full orchestra in the years between 1840 and 1860, Emilie Mayer turned increasingly to the composition of sonatas for violin and piano in the 1860’s. Between 1863 and 1869, five sonatas appeared in print, including the Sonata in A minor op. 18 (1864) and the Sonata in E minor op. 19 (1867). The dedications to well known persons such as the historian Leopold von Ranke (op. 18) and the conductor Wilhelm Wieprecht (op. 19) show how highly the composer herself valued these compositions. Hermann Zopff, founder of the Berlin Opera Academy, acknowledged the Sonata in A minor as a “Magnificent example of the genre, such as we would hardly have expected from a woman.”

In the Sonata in E flat Major, which has survived only in manuscript, Mayer’s originality and experience are evident in her dealing with forms, harmony and themes, as well as in her treatment of the instruments.

In these later works, one clearly hears the musical language of the romantic period. Emilie Mayer now seems freer in dealing with the traditional forms of Viennese Classicism. Thus in the Sonata in A minor, she allows the strikingly rapid second movement, which is indicated as allegro agitato rather than a scherzo, to be framed with a four-measure adagio, whose tranquil cantilena especially intensifies the following allegro. Before the movement ends, the composer surprisingly brings the tempo to a standstill by again taking up the adagio and then effectively resolving the movement with a chromatic passage.

New ambitions can be noted in the Sonata in E minor as well: the characteristic division of the individual themes was dispensed with here. Rather, they arise from the same musical elements. The development of the movements is defined by ever-new harmonic shifts; the themes lose significance and now, above all, serve the modulatory progression.

The Sonatas op. 18 and 19 are among the most mature of Emilie Mayer’s works. In this respect Albert Tottmann, in his Guide Through The Violin Literature of 1873, judged the sonatas to be: “Very broad ranging, mature, yet formal and masterfully designed compositions, of both fiery melodic and spiritual character, and manly [!] energy as well; of brilliant effect when well performed.”

At the age of 72, Emilie Mayer died suddenly on 10 April, 1883, after a brief illness. In spite of all her successes and accolades, the composer fell into obscurity for over 100 years.
—Almut Runge-Woll
(English edition by Daniel R. Gavaldón)

A native of France, Anne-Lise Longuemare obtained degrees in piano performance from the Montreal Conservatory, the Ecole Normale de Musique Alfred Cortot in Paris, Montreal University and UCLA, where she was awarded a doctorate for her ground-breaking work on Iberia by the Spanish composer Isaac Albeniz.