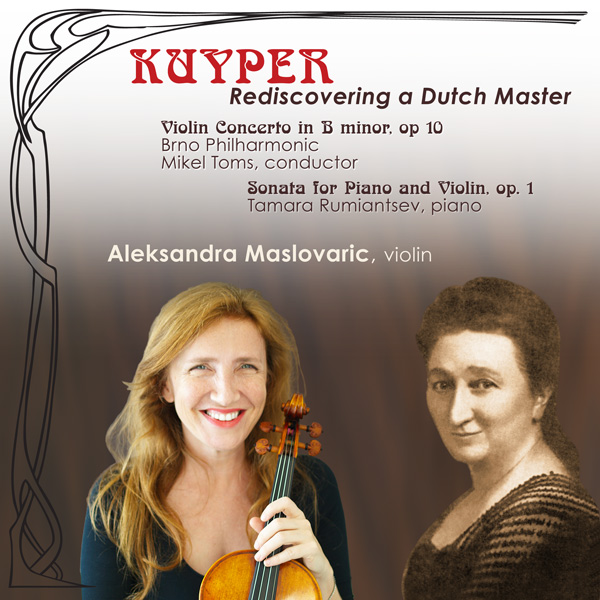 The modern premiere of two previously-unrecorded compositions by Elisabeth Kuyper: the Sonata for Violin and Piano, opus 1, performed by violinist Aleksandra Maslovaric and pianist Tamara Rumiantsev; and the Concerto in B Minor for Violin and Orchestra, opus 10, performed by soloist Aleksandra Maslovaric and the Brno Philharmonic led by Mikel Toms.

Sonata for Violin and Piano, op. 1

Violin Concerto in B minor, op. 10

The compositions of Elisabeth Kuyper are once again finding their proper place in music collections and the modern performing repertoire. The sonata and concerto for violin on this recording evoke comparisons to those of Bruch, Dvorak, Vieuxtemps, Lalo, and Saint Saens. Yet her mentor Max Bruch described Kuyper’s compositions as “…notable for their independent inspiration, beauty of form and forceful melody.”

I’m proud to play my part in reintroducing the works of another female composer who had undeservedly all but evaporated from modern thought.

A deep and immediate emotional connection with the expressive melodies, technical fireworks, and modern spirit in Elisabeth Kuyper’s work spurred me to begin down the path of my most ambitious and most fulfilling recording project yet.

Along the journey, I partnered with an inspired Dutch pianist to record Kuyper’s sonata in the beautiful city of Middelburg, The Netherlands—where it was first published. And perhaps like discovering a treasure map, upon finally locating manuscript parts for Kuyper’s concerto, my excitement overshadowed any thoughts imagining just how much work lay ahead. From connecting with the first orchestra and conductor who would join the crusade to help bring this music back to life, to the challenge of transforming those manuscripts, unplayed for 100 years, into a set of performance-ready parts, suitable for modern orchestras.

Yet here we are, and after all these travels I’m happy to report that I still feel that deep emotional connection and excitement every time I play these works. Most of all, I’m thrilled you have joined this expedition and look forward to us sharing Elisabeth Kuyper’s music with your friends and family at a live performance near you.
—Aleksandra

Elisabeth Lamina Johanna Kuyper was born in Amsterdam, The Netherlands on September 13, 1877, the first of three children of Elisabeth Robin and Joannes Kuyper, a merchant family living in the historically musical Jordaan neighborhood.

Elisabeth Kuyper’s early musical training began with private lessons on the family piano. From the age of twelve she was enrolled at the music school of the Society for the Advancement of Fine Arts, and at the age of seventeen, Kuyper was awarded with a diploma for piano performance and another diploma for piano pedagogy.

Her mentor Bruch described Elisabeth Kuyper’s compositions as “notable for their independent inspiration, beauty of form and forceful melody.” The sonata for violin and piano featured on this album was Elisabeth Kuyper’s first published composition. Her other published works include: a serenade for orchestra, a ballad for cello and orchestra, a piano trio, a cantata, several songs, and the concerto for violin and orchestra featured on this album. A symphony, an opera, a second violin sonata, choral music, and several more songs are included in Kuyper’s compositions that have yet to be published.

Like many other composers, Elisabeth Kuyper also had ambitions of conducting. While women throughout the world were finally winning the right to vote, professional opportunities for women musicians, especially conductors, remained extremely limited. So, Elisabeth Kuyper formed and led new ensembles, starting in 1908 with a women’s choir, and then in 1910, with the Berlin Women Musicians’ Orchestra. Max Bruch described the orchestra’s performances at the 1911 “Women in Home and Profession” exhibition as “…excellently and conscientiously prepared, and carried through with absolute confidence and without a hitch…” Bruch went on to state that the performances proved “…that women also, provided they have a sound musical training, and are led by intelligent management, are able to render orchestral music in a wonderfully efficient manner.”

In 1922, Kuyper led an orchestra and choir she had assembled especially for the convention of the International Council of Women held in The Hague. With the encouragement of Lady Ishbel Aberdeen, Elisabeth Kuyper endeavored to form permanent ensembles: first the London Women’s Symphony Orchestra in 1923, then the American Women’s Symphony Orchestra in New York in 1924. While both orchestras received good press and support, they succumbed to financial pressures, and Kuyper returned to Europe in 1925.

For several years, Elisabeth Kuyper returned to her teaching post at the Hochschule für Musik, in Berlin. In 1926, Kuyper wrote in an autobiography that “…there is still so much ahead of me to attain and achieve; I have, as of yet, only partly used my compositional powers.” However, she composed very little at this time, and as her health deteriorated, she spent more and more time recuperating in alpine retreats, eventually retiring in Muzzano, Switzerland, where she died in 1953, at the age of 75.

Her violin sonata in A Major, opus 1, was first performed by violinist Marie Hekker and Elisabeth Kuyper herself on the piano, on July 18, 1902 at a music festival in the city of Nijmegen. The music editor of Het Nieuws van de Dag in Amsterdam wrote: “In the Sonata for violin and piano by Lize Kuyper, we are introduced to a new presence on the musical stage. This opus is so masterfully treated and yet reveals such warm feelings that one can only view these first fruits to be the work of a person who has received everything from nature as an artist and will surely take a prominent place…” A. A. Noske of Middelburg published the sonata in 1902, at the encouragement of one of Kuyper’s music professors. A review in the German music periodical Die Musik stated that “…this sonata testifies to great talent, technical skill and a fortuitous gift for conveying emotion, so it will be both performed and heard with pleasure.”

Elisabeth Kuyper’s violin concerto in B minor, opus 10, was first performed on February 13, 1908 with the Hochschule orchestra, conducted by the 70-year-old Bruch. The commercial premiere shortly thereafter featured soloist Anton Witek with the Berlin Philharmonic Orchestra led by Dr. Erst Kunwald. Die Musik described that concert as an “excellent success,” placing the work in the lineage of violin concertos by Bruch, Vieuxtemps, Lalo and Saint-Saëns, and further stating that the “noble melodies of the cantilenas, the beautiful orchestration and the massiveness of the violin should be of great advantage in popularizing this, as of yet, unprinted concerto.” Prior to publisher Simrock releasing an arrangement in 1910, other commercial performances include Witek, Kunwald and the Berlin Philharmonic performing the Dutch premiere in August 1908 during the orchestra’s summer residence at Scheveningen, and a 1909 performance by soloist Nella Gunning with the Arnhem Orchestra. After the Arnhem performance, Het Weekblad voor Muziek described Kuyper’s new concerto as “…very cleverly constructed and powerful, yet also very personal, with unique and inventive instrumentation.” There were several performances throughout Europe over the next few years, but the growing commercial and popular success of Elisabeth Kuyper’s violin concerto seems to have been interrupted by the First World War, with no known performances until today.

Sonata Piano and Violin, opus 1
published by A. A. Noske, Middelburg, 1902

Concerto in B minor for Violin and Orchestra
published by N. Simrock, Leipzig, 1910
rental parts provided by Boosey & Hawkes, Inc.