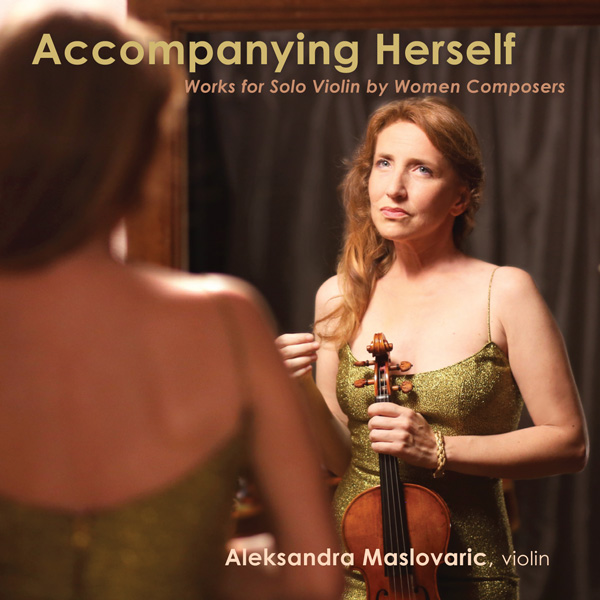 Firstly, I would like to thank everybody who has joined this mission of acknowledging women composers, with special thanks to the classical radio hosts and programmers all over the world who have had the courage to explore something beyond the standard repertoire with their audiences.

When I decided to make a solo album, a big change from the previous concerto, I also saw it as an opportunity to take liberties with the repertoire a bit. I’d long admired the works of nineteenth century superstar Pauline Viardot and present‐day superstar Diane Warren, and hope that these arrangements for solo violin capture some of the passion of their original songs.

Likewise, I hope that you share my excitement with the diversity of works on this album. From Bacewicz’s fireworks, the classic form of Bosmans, and the anciently inspired harmonies by Price, to the modern playfulness and soulfulness from Seischab, Auerbach, and Richer. I suggest that the future of concert music may lie in expanding the repertoire beyond the B boys, and embracing the compositional voices of women.
—Aleksandra

Titled after the classic carrousel ride and the feeling of returning to something that you love, Aleksandra composed Ringelspiel at her Los Angeles home in 2016.

While her initial professional success was as an orchestral and solo violinist, today Bacewicz is perhaps best known as a groundbreaking composer of symphonic and chamber works. At the time of her death in 1969, the catalog of publishing house Polskie Wydawnictwo Muzyczne included more compositions of hers than of any other composer, including Frédéric Chopin. Included here, Polish Caprice for solo violin was composed in 1946.

Henriette Bosmans was born in Amsterdam into a musical family, with her father working as principal cellist of the Concertgebouw Orchestra, and her mother a concert pianist and professor at the Amsterdam Conservatory. A well‐ respected pianist herself, by the age of 25, Henriette began regularly appearing as a solo pianist with the Concertgebouw Orchestra. Her compositions include several concertos for solo instrument and orchestra. Included here as tracks 4 and 5 respectively are her cadenzas for the first and second movements of Mozart’s Violin Concerto in G Major. Since 1994, the Society of Dutch Composers has awarded the Henriette Bosmans Prize to talented young Dutch composers.

Originally composed for the forthcoming video game Jupiter Halo, created by Big Kidd Games for the Xbox and PC platforms.

Lera Auerbach was born in Soviet Russia, and defected to the United States while on a concert tour in 1991. An active piano soloist and composer, her compositions to date feature numerous orchestral works including a commission by the Royal Danish Ballet. Dancing with Oneself is the first movement of six of the Lonely Suite, a Ballet for a Lonely Violinist. The piece was premiered by Vadim Gluzman in San Francisco in 2004.

The enigmatic Jeannine Richer was born in France in the early twentieth century, and became a professor at the famed École Normale de Musique de Paris. Her published compositions consist primarily of instrumental works. Rupture is dedicated to Soryanna.

Premiering on this album, Interruptions was inspired by the constant directional shifts we encounter as we attempt to pursue meaning.

Born in Paris into a family of professional Spanish musicians, Michelle Ferdinande Pauline García Viardot became one of the most respected singers of her time. While not considering herself a composer, Viardot’s works include operettas, choral works, instrumental chamber music, and many, many songs. Arranged here for solo violin by Maslovaric, Tarentelle was originally written as a song for voice and piano, and dedicated to Viardot’s cousin, singer Madame Antonia Léonard (née Mendes) who had performed across Europe with Viardot.

Composed in 1996, and premiered in 2003 by violinist Vadim Guzman, T’filah, translating as “Prayer” for violin solo, was described as a reaction to the tragedy of the Holocaust.

I Learned From the Best
Composed by Diane Warren, arr. A. Maslovaric
Realsongs (ASCAP), 1998

While her name may still be unfamiliar to some audiences, Grammy award‐winning American composer Diane Warren’s songs, including mega hits performed by Beyoncé, Gloria Estefan, and Barbra Streisand to name just a few, are certainly well known. This piece was originally released by superstar Whitney Houston.

An active musician, teacher, critic, and composer, Hedda Seischab is based in Reutlingen, Germany. Verwandlungen, translating in English to “Transformations”, is comprised of five related brief movements presented on track 12, and a second tale, theme, and eight variations presented together on track 13.

An American pianist, composer, conductor, educator, and author, Dr. Deon Nielsen Price’s compositions include large orchestral works and concertos, and intimate chamber music. Stile Antico, referring to the ancient styles which inspired the work, was originally composed circa 1975 for solo cello, and arranged for solo violin in 1990. Included here, Tonos is the second movement and “refers to ancient Greek diatonic tetrachords which form the basis for folklike melodies.”